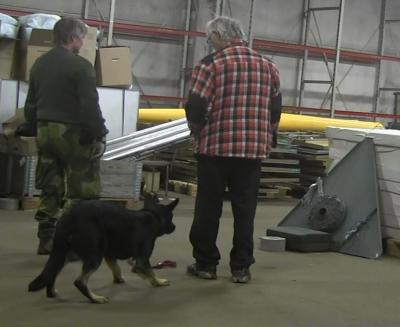 The domestication of the dog (Canis lupus familiaris) started 15 000-33 000 years ago, when the humans mainly were hunter-gathers (Wayne & vonHoldt 2012). Ever since, a selective breeding have been going on and today there is about 400 dog breeds in the world (Salgirli Demirbas 2012). Already during the Roman times, different types of specialised dogs were used, such as hunting dogs, guard dogs, herding dogs and lap dogs (Clutton-Brock 1995). In 1899, police dogs were used for the first time in Europe by the Belgian Police Force (Ozcan et al. 2009).Â The temperament of working police- military- or service dogs is of great importance because the handler must know that the working dog can cope with its surroundings and perform the duty it has been trained to perform whenever it is needed (Wilsson & Steen 1995). To find dogs that has a temperament suitable to be trained for military- or police work, standardised behavioural tests are often used (Wilsson & Sundgren 1997); (Haverbeke et al. 2009) to select dogs with temperaments that has the right level of traits such as sociability, playfulness, search and aggressiveness (Bryson 2002).

The aim of this master thesis was to investigate which behaviours the dogs display during the standardised behavioural test used by Swedish Armed Forces (SAF) to select suitable military- or police dogs. The questions to be answered were:

2. Â Â Â Â Â Do dogs that pass the standardised behavioural test display different behaviours during the subtests than the dogs that fail the test?

3. Â Â Â Â Â Is there a difference of behaviours displayed during the subtests between the sexes and test stations?

4. Â Â Â Â Â What is the underlying motivational system of the dogs that pass the test?

So far, no one has looked at which behaviours the dogs actually display during the different subtests of the standardised behavioural test used by SAF. The first hypothesis is that it will be a difference in behaviours displayed during the different subtests since they aim to measure different behavioural traits. Acoustic startle aims to measure fear, Visual- and Gradual Visual startle aim to measure fear as well as aggression, while Searching subtest measure interest in objects and persistence of searching (Wilsson & Sinn 2012).

The second hypothesis is that dogs that passes the standardised behavioural test will not show behaviours associated with fear, for example low body- and tail positions, trembling or flight (Svartberg 2007a) since fearfulness is a undesired trait in working dogs (Haverbeke et al. 2009).

The last hypothesis is that the underlying behavioural dimension behind the dogsâ reactions during the startling subtests may be fear, since previous studies has found that many dogs respond with fear-induced aggression during startling subtests (King et al. 2003; Ley et al. 2007; van der Borg et al. 2010) or behavioural tests with the aim to assess aggression (van der Borg et al. 2010), and in one study nearly 70 % of military working dogs reacted with fear-related aggression to potential aggression-inducing stimuli (Haverbeke et al. 2009).Â Â