All begun in Norway were there have been three attempts to reintroduce the musk ox (Ovibos moschatus) from Greenland. In 1931, 10 animals were transported to Norway, and after 7 more years two new animals were introduced to that population, and this was to increase the genetic variation. Unfortunately during Second World War these animals were eradicated, in order to get food and clothes, as well as being so easy to kill with a gun. When the musk oxen get attacked it stands totally still in a circle with the youngsters in the middle. The last attempt to reintroduce musk ox to Norway from Greenland was between 1947 and 1953. The journey begun with 27 musk ox calves, but only 10 survived and was reintroduced at Dovrefjells nationalpark. Offspring of these animals constitute the existing musk ox populations in Norway and Sweden today.

In Norway in 1971, there were a military exercise and five animals got separated from the herd. These musk oxen migrated to the border of Sweden, and they established their territory at Rogen in Femundsmarka. These animals consist of two females (Kari and Åsfrid) with their calves (Kjell and Ulrika) and a male (Nils). In the summer 1973, these animals had moved more than ten miles to enter the north part of Rogen, where the females calved. In the winter between 1977 and 1978, six animals died from E. rangiferi ( Elaphostrongylus ). From 1971 to 1991, they were 64 calves born, and in the summer of 1980 there were 34 animals, this was the highest number of musk ox in Sweden so far. In 1984, something amazing happened, one of the females had twin calves, this is unique, and has never been recorded in any another wild population before. After this period the numbers of individuals were decreasing, and the main reason was inbreeding. In 1992, the population was only 20 animals, and three years later two calves were born. Even if the musk ox were reproducing, they were still decreasing in number; in 1998 it was 12 animals. In 1999, there were three females giving birth; the population under a period of two years was 13 animals. In 2002, there were only seven animals left, in May there were born two calves, the population of musk ox was now nine. One year later another calf was born, and the population increased by one more individual. Between 2003 and 2006, there were three attempts to extend the genetic variation (mentioned in the background). In spite this effort the population was decreasing by three animals, in 2010 f or the first time in eleven years a calf was born. Today are the Swedish musk ox population only seven individuals. 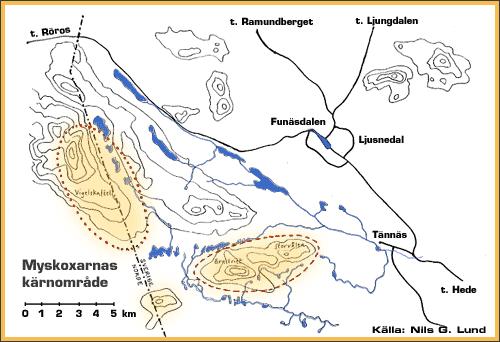 This is a map over the Swedish musk ox locations on both the Swedish side and the Norwegian side.
» Front page