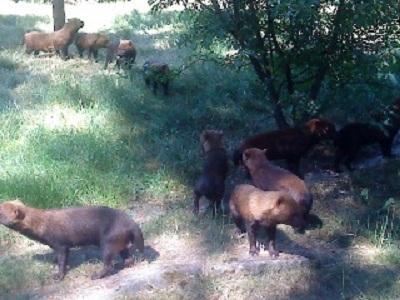 A group of bush dogs living in KolmÃ¥rden Zoo and Wildlife park. Picture taken in the summer of 2010.

The bush dog (Speothos venaticus) is a small South american canid. It weighs between 5-8 kg and live in packs with up to 12 members. The bush dog is highly social and utilize this sociality to hunt. This enables the bush dog to hunt small prey like rodents, trapping the prey in their burrows, but also larger prey like different kinds of deer. It has also been documented where six bush dogs hunt down and kill tapirs up to a size of 250 kg.

The habitat of bush dogs range from different kind of forrest in the eastern Central America and northern South America to cerrado habitats in Brazil. Common to the different habitats is the close proximity to a water source, usually a small stream or similar.

The IUCN classified the bush dog as vulnerable in 2004 and since then ecological assessments have been started to form an understanding on the role of the bush dog in the ecosystem. The main threat to the species is habitat convertion.